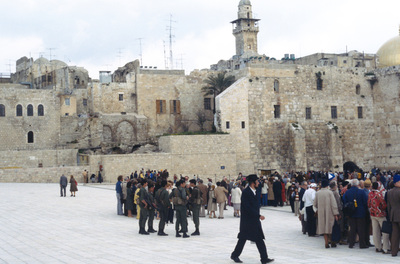 This photograph taken from the Noble Sanctuary shows the al’Aqsa Mosque at frame right. It also shows Israeli soldiers, tourists, and religious pilgrims at the site. The Noble Sanctuary contains the Dome of the Rock and al’Aqsa Mosque, two important sites in the three main monotheistic religions. Al’Aqsa has been modified many times since it was rebuilt in 780, but it is the second oldest mosque in the world.