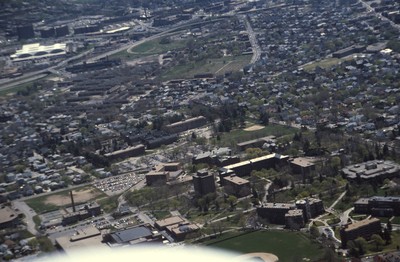 Providence College struts in the foreground of this photograph, with Douglas Ave., St. Patrick’s Cemetery, and the Chad Brown Housing Project (1941) behind. Chad Brown was the first low-rent public housing project in Providence and comprises 28 row houses on 13 acres. Whereas Elmhurst remains one of the most secure and stable neighborhoods in the city. In the 17th century, its mills economically sustained the neighborhood, but due to their closing in the late 1950s Wansuck has decayed and suffered sustainability.