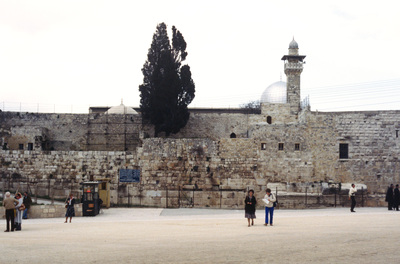 Al’Aqsa, which translates to ‘the furthest’, is one of the oldest mosques on earth. It is located next to the Dome of the Rock, and was first completed in 702. It was rebuilt completely in 780, and alterations have continued over the last millennium, including, “the outstandingly stately minbar,” (Kuhnel 88) commissioned by Saladin in 1187. This photograph shows the mosque peaking over the southern wall of the Noble Sanctuary.