Jerusalem: Tourists at the Dome of the Rock 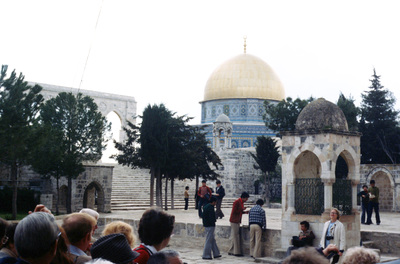 The Dome of the Rock, the oldest surviving Muslim monument, is built around the foundation stone. The need to build around the holy rock influenced it’s unusual floor plan. The Dome of the Rock’s form is that of an octagon, with four salient porches as entrances. The dome itself is wooden,, supported by a wooden drum, and with a 20 meter diameter. The Dome of the Rock is a significant location in all three of the major monotheistic religions. This photograph shows the buildings popularity as a tourist destination.