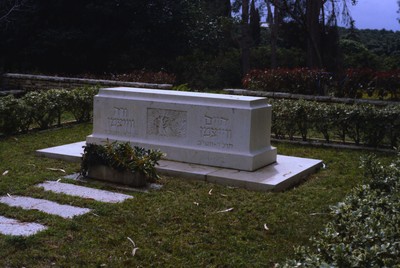 After Israel was recognized as a country by the US, Chaim Weizmann was chosen to serve as the country’s first President. He was elected in February of 1949 and served as Israel’s President until his death in 1952. It was in April of 1949 that he traveled to the US in search of contributions for the State of Israel. While there, he managed to collect a large sum of $23 million and put it towards their research facility, which is now know as the Weizmann Institute of Science.

Upon his death, Weizmann requested to be buried in the gardens next to his house in Rehovot. Designed by Moshe Ziffer, the tombstone was designed after the tombstones of missing soldiers in Great Britain, a tribute to their son. In the center the symbol for the Weizmann Institute of Science was chiseled by designer Erich Mendelsohn.