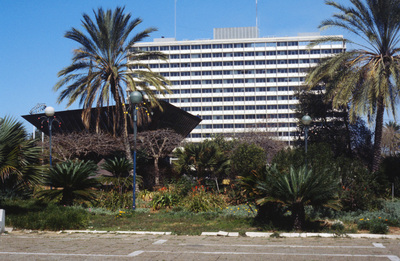 As early as 1945 Yaacov Ben Sera, city engineer, was suggesting a transformation of Machei Israel Square into the civic heart of Tel Aviv. This 1980 photograph shows the City Hall and the Yigal Tumakrin’s 1975 memorial to the Holocaust, located in the redesigned square.

The city hall was designed by architect Menahem Cohen who won a 1957 design competition, proposing that the building be a single high rise structure rather than a series of smaller buildings. the city hall, built in the brutalist style and heavily influenced by Kenzo Tange’s 1952 design for Tokyo’s Metropolitan Government Officies. The building was completed in 1965.

Following the assignation of Prime Minister Rabin in 1995, the square was renamed Rabin Square.