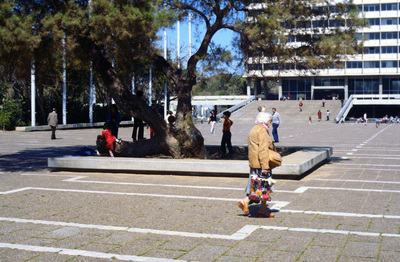 Proposed by city engineer Yaacov Ben Sera in 1945, Machei Israel Square was transformed over two decades from a place of recreation to the civic heart of modern Tel Aviv. This photograph show’s the plaza and Menahem Cohen’s city hall. The city hall was completed in 1965. Cohen was named architect after winning a design competition for the city hall in 1957. His proposed structure was a single high rise structure in the brutalist style.