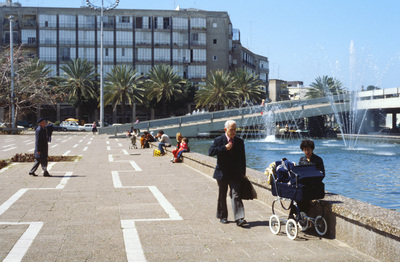 The square, which was proposed by Yaacov Ben Sera to be the new civic heart of Tel Aviv, was designed by architects Abramham Yaski and Shlomo Pozner, who won the job during a 1951 competition. They adhered to Sera’s plan which called for no vegetation, pavement, and space enough for 80,000 people.

The plaza is a large open space featuring a repeating geometric pattern in white on red brick. One end of the plaza iborded by vegetation and the other has a pool known as the Ecological Pool. The addition of the city hall building in 1965 redefined the hierarchy of the square and emphasizing the new urban symbolism of the new square.