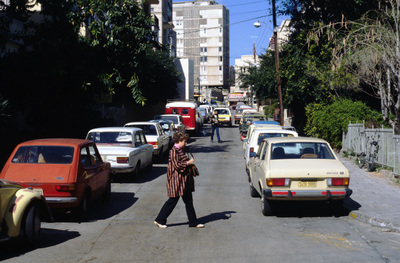 This photograph of a residential street in Tel Aviv shows traces of Scottish planner Patrick Geddes plan in the narrow street and the patches of greenery. The Geddes Plan, drafted in 1926, attempted to design Tel Aviv in the style of garden cities, a popular urban concept at the time, which favored the city dweller over the automobile. Economic constraints and enormous demand for housing eventually lead to the development of high rise structures and buildings in the International style dominating the city, with only traces of Geddes Plan, such as in this image.