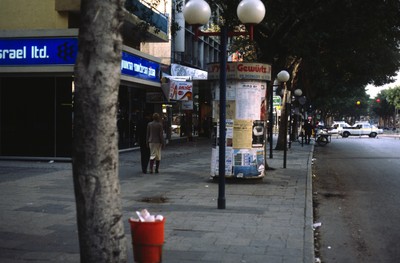 This photograph was taken at 99 Dizengoff St. in 1980. The film 99 Dizengoff had just been released the year before which perhaps prompted the taking of this photograph at this particular address. Also pictured are some of the retail clothing shops that make Dizengoff Street a destination for shoppers. Since the 1970s the street has seen some commercial decline, however high end fashion outlets remain on the northern end of the street.