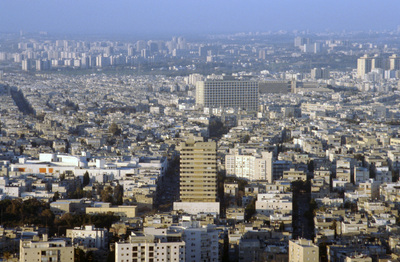 This photograph shows Metzudat Ze’ev, an office building in Tel Aviv named for Vladimir Jabotinsky. Jabotinksy was a leader of the right-wing, anti-socialist movement within Zionism. Jabotinsky argued that the future of the Jewish state depended on the energy and resourcefulness of the people in areas of manufacturing.

Also seen in this photograph is Tel Aviv City Hall, designed by Menahem Cohen, winner of a 1957 design competition for the building.