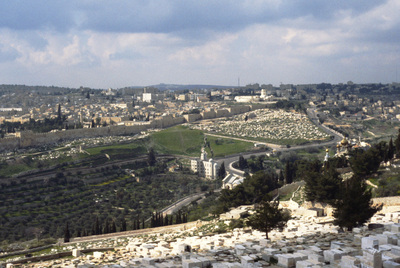 This photograph shows the North East section of the Eastern Wall in Jerusalem. At the left is the Golden Gate, dating from the 7th century AD. The Golden Gate is significant in the Jewish, Christian, and Muslim traditions.

At the left of the photograph the Church of Mary Magdalene, designed by Russian architect David Grimm and completed in 1886, peaks over the Mount of Olives, where this photograph was taken. The foreground shows a Jewish cemetery that dates back three millennia.