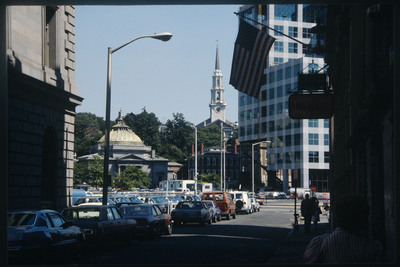 The Federal Building is just visible to the left of this picture pointed from the financial district towards the East Side. That building was built where the edge of the Providence River and its port activity used to be located. It housed customs, the federal district court, and other federal offices. The Providence Institution for Savings Building (a.k.a. Old Stone Federal Savings Bank is the building with the Corinthian portico and low dome surfaced in gold leaf adornment against verdigris. Moving to the right we can see the spire of the First Unitarian Church, considered by architect John Holden Greene to be his masterpiece. Finally, the former Old Stone Square at 121 South Main is a pure modernist structure built by Edward Larrabee Barnes shortly after he designed the former IBM tower on Madison Ave.