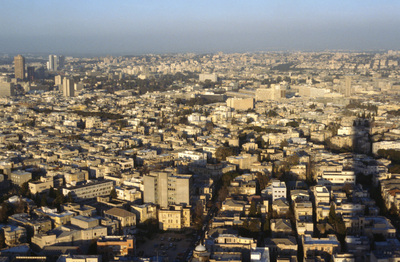 This image shows the urban density of Tel Aviv, Israel’s primary city. At the extreme left, peaking over the horizon, is the former I.B.M building, designed by Yasky & Partners in the 1970s. Quite literally in the shadow of the I.B.M. Building here is the Israel-America House of the Israel-American Chamber of Commerce, architecturally notable for its use of platforms as a building element.

Tel Aviv quickly earned the nickname the White City, and from this photograph (4 of 6) it’s easy to see where it came from. The city’s architecture is overwhelmingly in the International and Bauhaus style. The architecture is designed to favor function over form. The functionalism of Tel Aviv’s architecture compliments the socialist aesthetic of 1930s and 40s Zionist political mentality. The International style embraced in Tel Aviv is now understood to be a perfect match for the Zionist project.