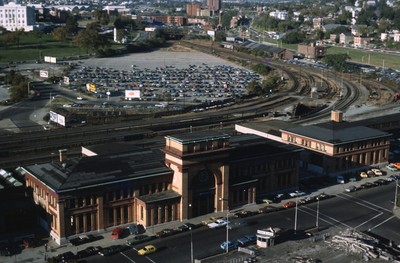 Union Railroad Depot, by Thomas A. Tefft, was opened in 1847. It was considered "a brilliant example of Romanesque architecture" in its time, and the longest building in America. As the city continued to grow, so too did the need for terminal space, ultimately resulting in the paving over of the remnants of the city's inland bay in 1890. The question of what to do with the now undersized station was spontaneously answered in February of 1896 when the station suffered a catastrophic fire. Remaining buildings from Teffts Union Railroad Depot can be seen in the upper right-hand corner on the railroad tracks. Unfortunately, these were demolished in 1979. Railroad tracks formed what was locally called a “Chinese wall” that separated the different districts of downtown Providence.