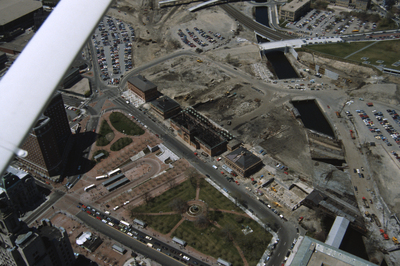 Railroad relocation was one of the core elements of the Providence Renaissance. In this aerial we can see the dirt lot where the railroad tracks were formerly located and sadly, the burned roof of Union Station. Union Station suffered severe fire damage on April 4, 1987, one year after the completion of its replacement station (Providence Station). Union Station had been in the works for a remodeling for other use (office space) alongside much of the area under redevelopment plans through the River Relocation Project and overall revitalization of Downtown Providence. The fire was not necessarily a setback for all projects, but its rehabilitation process conjoined itself to the (re)developments at Kennedy Plaza and of Waterplace Park.