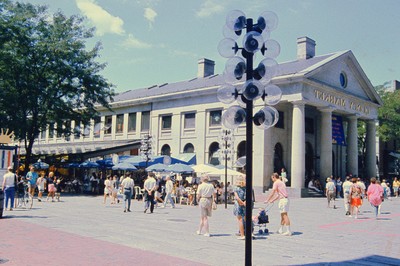 Boston’s Quincy Market, a 19th century marketplace built in the Greek Revival style. It is American architect Alexander Parris’ most famous building, and is made almost entirely of granite from New England. The Quincy Market fell into decline in the 20th century until it was redeveloped in the 1970s by Rouse Company and Benjamin Thompson and Associates. It continues to sell food, but also houses retail and entertainment facilities. This photograph dates from the mid 1980s.