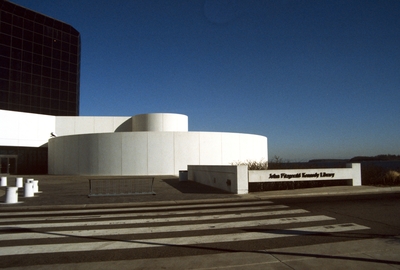 Designed by Chinese-American and modernist master architect I. M. Pei, the John F. Kennedy Presidential Library and Museum opened in 1979 after years of set back. It is located in the Dorchester neighborhood of Boston. This photograph shows the circular section of the building which houses two theaters. To the left is a 115 glass pavilion that connects the theaters to the tower where the archives and offices are located (not pictured).