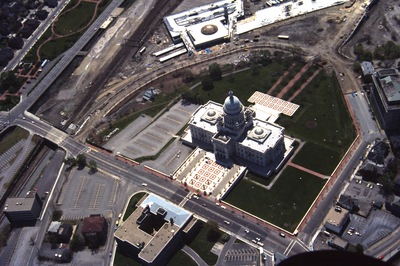 Most revitalization projects of Downtown Providence started in the mid eighties, through direction of ex-mayor "Buddy" Cianci and plans such as the River Relocation Project. Especially, shown in this photograph, a newly enacted Providence Station is finalized, redirecting most railroad lines and changing the scope of downtown. Providence station's dome is suggested by Woodward to be a nod towards the dome of the State House, its close neighbor who wears the fourth largest self supporting dome in the world. Capital Center would undergo more changes in the coming years, such as repaving, the eventual demolition of the Rhode Island Normal School Building, and enacting of Providence Place Mall, among many.