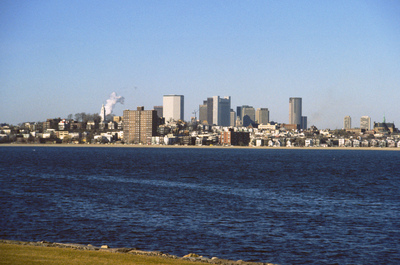 The Boston skyline is photographed from The John F. Kennedy Presidential Library at Columbia Point in this 1987 photograph. In 1963 Kennedy chose Boston as the location of his Presidential Library because he felt the other Presidential Libraries (there were only four at the time) were too far away from scholarly resources. Within a month from that time, October 1963, he was assassinated. Nearly two decades later in 1979 the library was dedicated.