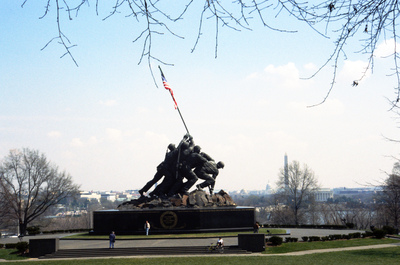 Also called the Iwo Jima memorial, the Marine Corps War Memorial was designed by Felix de Weldon. He was inspired by the photograph Raising the Flag on Iwo Jima taken by Joe Rosenthal during the Battle of iwo Jima. The memorial is dedicated to all Marines who have perished in battle since 1775, but features specifically Marines and a sailor from the Second World War. The memorial was officially dedicated in 1954 by President Dwight D. Eisenhower.