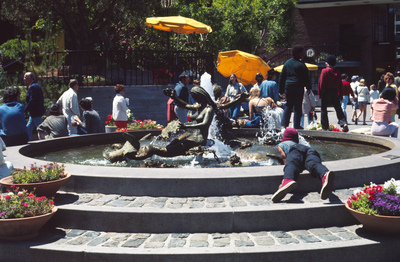 Ghiradelli Square was originally the headquarters for the Ghiradelli Choolate Company, which purchased the entire city block in 1893. In the 1960s the square went up for sale and the purchasers readapted it to house a restaurant and shops making it the first major adaptive re-use project in the United States. In 1982 Ghiradelli Square was placed on the National Register of Historic Places. The fountain was made by Ruth Asawa, a California native and American artist.