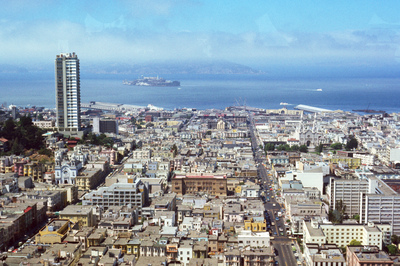 This San Francisco cityscape contains many of its well-known landmarks, including Alcatraz Island on the horizon and Sts. Peter and Paul Church at the left.

Alcatraz Island was developed as a prison for the military and the FBI until 1963. It is now an area for recreation and a National Historic Landmark.

Also prominent in this photograph are San Francisco’s famous “Painted Ladies”, Victorian and Edwardian houses generally painted in three or more colors. Roughly 48,000 homes were built in this style between 1849 and 1915.