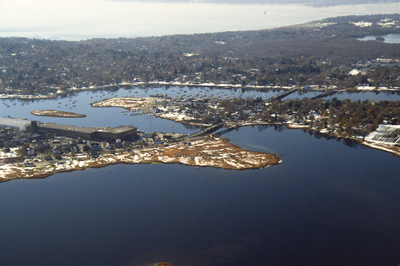 This aerial photograph was taken over Warren and looks west across Barrington and to Narragansett Bay. This photograph shows the distinctive shoreline of Belcher Cover and Tyler Point. Barrington had been a part of Warren from the 1747 until 1770. Visible at the from left is one of the textile mills built in Warren in the late nineteenth century after the decline of the whaling industry.