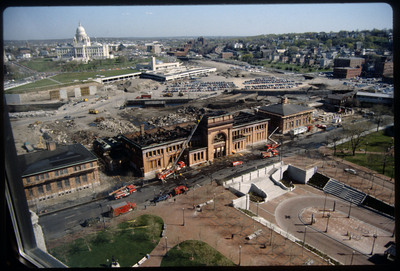 Providence's first railroad station was Union Railroad Depot, a brick edifice built in 1847 and designed by Thomas A. Tefft for the Providence and Worcester, Providence and Stonington, and Boston and Providence Railroads. This building was lost to fire in 1896, and replaced by Union Station, completed 1898, which consisted of five large brick structures, built by New Haven Railroad. It was considered "a brilliant example of Romanesque architecture" in its time, and the longest building in America. As the city continued to grow, so too did the need for terminal space, ultimately resulting in the paving over of the remnants of the city's inland bay in 1890. Union Station was in the process of being redesigned for office and retail use when it suffered an upper stories fire on April 26, 1987. In this photograph, behind the fire-stricken but extinguished Union Station, is the newly built Providence Station with its two story parking garage and campanile.