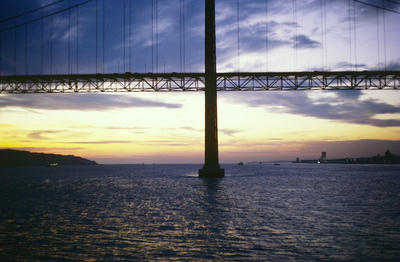 The 25 de Abril Bridge in Portugal is the largest suspension bridge in the world. Crossing over the Tagus River, the bridge was built by the American Bridge Company and inaugurated in 1966. It connects the capitol, Lisbon to Almada. Until 1974 the bridge was known as the Salazar Bridge. It was named for Antonio de Oliveira Salazar, who served as prime minister and founded the Estado Novo, the authoritarian government that presided over Portugal until 1974.