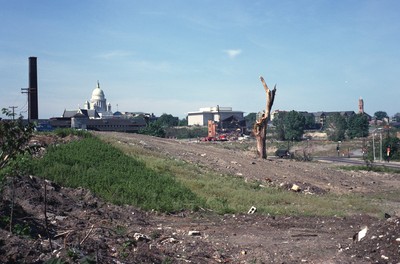 Taken at what was once Moshassuck Square (originally Randall Square), this photograph shows the general wasteland of the area before redevelopment. Many buildings in the area had been demolished or otherwise left to ruin. After a fire destroyed most structures in the area of the American Screw Company industrial complex on July 5, 1971, the Rhode Island Historical Preservation Commission added Moshassuck Square National Register of Historic Places. This area, an early settlement space because of the confluence of the Moshassuck and Providence rivers, has been redeveloped and its salvaged buildings such as the Fletcher Manufacturing Company remodeled for office space.