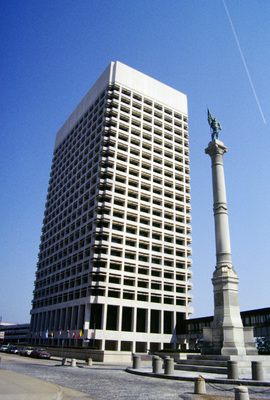 The Confederate Monument in Commercial Place had it’s corner stone laid on the thirty second anniversary of Confederate President Jefferson Davis’ inauguration. In 1907 a bronze statue of Johnny Reb, the personification of the southern states, was placed atop the monument. It was briefly dismantled in the late 1960s when construction of the Bank of America was underway. In 1971 it was reassembled. The Bank of America center, a 23 story modernist office tower was completed in 1967.