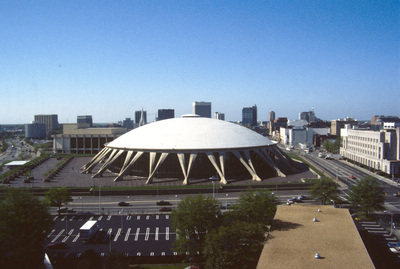 Featuring the world’s largest concrete dome, the Norfolk Scope (derived from kaleidoscope for it’s re-configurability) is a center for sports, entertainment and conventions in downtown Norfolk. It was designed by Italian architect Pier Luigi Nervi who based it on his design for the Palazzetto dello Sport, built Rome for the 1960 Summer Olympics. As part of Norfolk’s postwar, the revitalization, funding for the dome came from the federal government after architects solicited Sen. A Willis Robertson. Of the $35 million cost, $23 million came from federal funds.