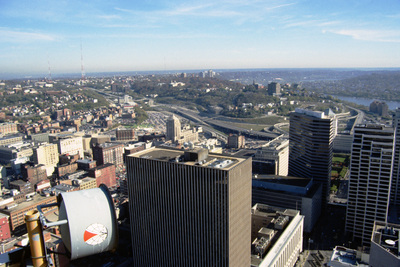 This east facing aerial view looks across downtown Cincinnati from Carew Tower. Of note in this image are some of Cincinnati’s taller buidlings: The Fifth Third Center and the Chiquita Center. The Fifth Third Center, towering in the foreground, is a skyscraper built in the International Style in 1968, and is home to the Fifth Third Bank. Further back, the stripped building on a diagonal was formally Columbia Plaza, completed in 1984. It is now the home of Chiquita Brands International.