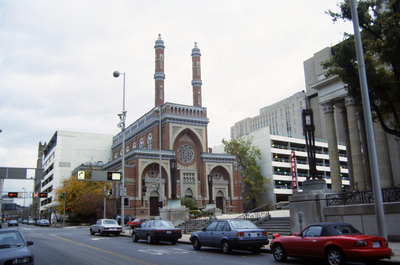 The Plum Street Temple is among the oldest American synagogue buildings still standing and in use. It was designed by James Key Wilson who blended Neo-Byzantine architecture with Moorish Revival style. It was the first of many American synagogues to be built in the Moorish Revival style. This photograph dates from 1994, one year later the building was restored. The Plum Street temple is on the National Register of Historic Places.