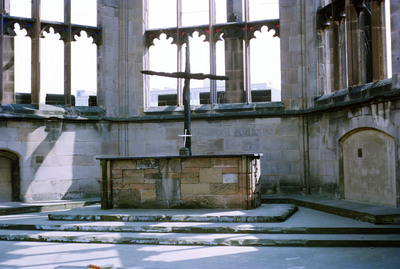 Stonemason Jock Forbes created this wooden cross from two burned beams that had once held the roof of Coventry Cathedral before it was bombed during World War Two. The cross of nails, also made from the old cathedral rubble, was made by Provost Richard Howard. A similar cross made from the same nails was given to the Kaiser Wilhelm Memorial Church in Berlin. Similarly, it was destroyed by bombing and the damaged structure was been preserved beside a new building.

The words ‘Father Forgive’ were inscribed after the bombing, at the instruction of Provost Howard.