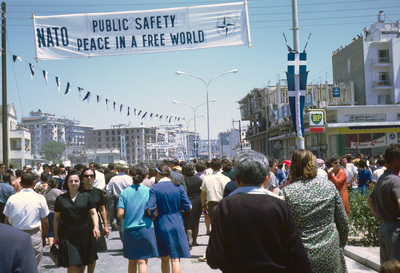 This photo from Kavala is dated October 1968. A year and a half earlier the Greek military lead a coup d’etat and the country went into a police state in which torture was common, and all activities were under surveillance. In late 1967 King Constantine II took a plane to Kavala with the hopes of launching a counter coup d’etat. It quickly failed and the king was forced into exile. Greece remained a member NATO despite criticism of it’s human rights record. The Greek military junta was closely involved with NATO and CIA in planning it’s coup because of Greek’s strategic position in the cold war.