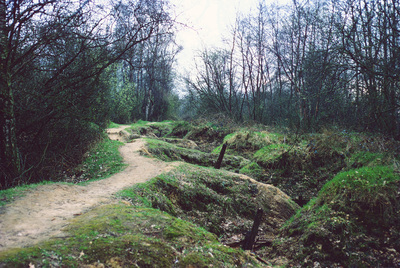 A1969 photograph of World War I trenches in Ypres. Ypres was the starting point of the famous Christmas 1914 truce when German soldiers decorated their trench with candles and sang carols on Christmas Eve 1914. British soldiers quickly joined, and in some places the ceasefire lasted until New Years Day. Ypres, an ancient Belgium town, was the center of intense fighting between Germans and allies. This photograph is of trenches in Sanctuary Wood, Hill 62.