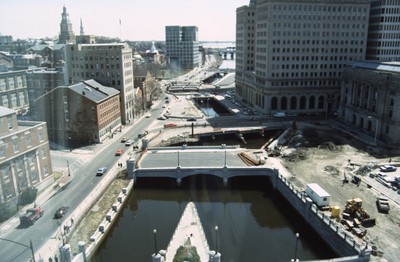 This photo shows work in progress in relocating Suicide Circle and uncovering and re-channeling the Mosshasuck and Woonasquatucket Rivers. Newly constructed Washington Street Bridge is in the foreground, but the old Fulton Street entrance to Suicide Circle is still in use to the south. Ultimately the Providence River will be re-channeled with pedestrian walkways along the old harbor.