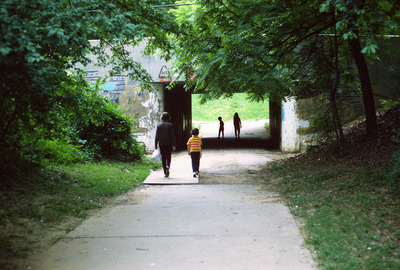 Greenbelt was built during the Roosevelt Administration at the tail end of the Great Depression. This photograph shows Greenbelt in 1970 and the walkways are deteriorating and walls are covered in graffiti.

Greenbelt was a new town built and owned by the federal government, and was inspired by the Garden City movement in Europe. Greenbelt was one of three American Garden Cities, and the first to be constructed. Residential applicants were put through a screening process based on income, occupation, and willingness to participate in communal activities. The screening also excluded African Americans which lasted until 1963. As of 2000 the census reports Greenbelt is 40% African American.