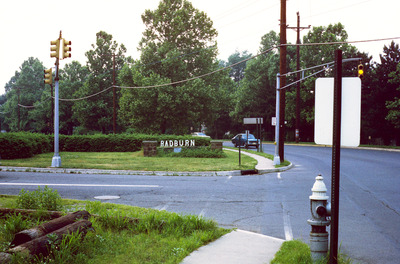 Radburn is a planned community in New Jersey that was influenced by England’s Garden Cities. It was founded in 1929. Ironically it was billed as, “a town for the motor age,” but modern vehicles, and families owning multiple vehicles were not anticipated, and the communities numerous cul-de-sac’s have become cluttered with automobiles they were not designed to accommodate. This 1970 photograph shows the entrance to Radburn in Fair Lawn.