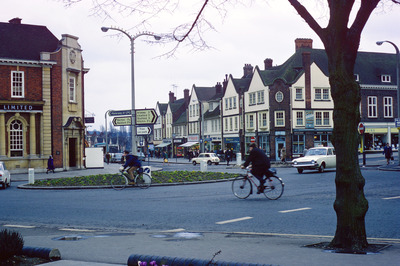 Letchworth was one of the first of England’s “new towns,” and Sir Ebeneezer Howard’s first Garden City. While living in the United States, Howard was influenced by the poet Walt Whitman, among others, to tackle the problems of urban life. His idea was the garden city, which he wrote about in his 1898 publication Garden Cities of To-morrow. This photograph was taken in the Letchworth’s Town Center at Station Place.