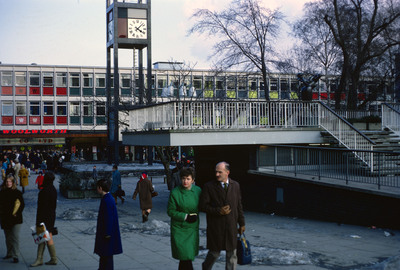 Town center in Stevenage photographed in 1969. Opened in 1959, this business area has at it’s focal point the clock tower, made well known by the 1967 British comedy “Here We Go Round the Mulberry Bush” and dedicated in memorial to Lewis Silkin, Minister for Town and Country Planning. Following World War II the town was developed, and the original part of town became know as Stevenage Old Town.