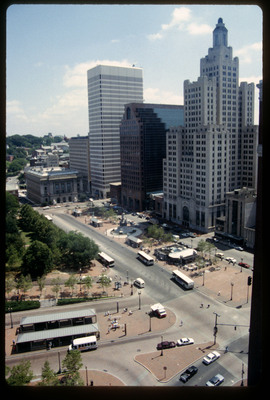 According to Jordy, Walker and Gillette’s Industrial National Bank Building is still Providence’s finest skyscraper as it is a “superbly Art Deco culmination of the Providence skyline in a major example of a setback.” Though stepped buildings in New York City had been architects' solution for Manhattan's strict zoning regarding adequate light and air, facing no such restrictions in Providence, the New York architects, Walker & Gillette, chose to keep symmetrical stepped massing. The base and the trim at the base's top was built to match the cornice height of existing adjacent (now gone) four-story buildings. The building has remained relatively unchanged over the years with the exception of the lobby, the upper windows and several masonry eagles at the top of the tower on the light beacon, which were removed decades ago after an eagle fell to the street below.