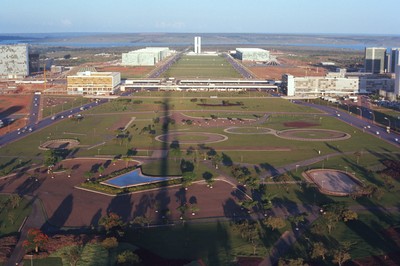 This east facing view of Brasilia was photographed from the TV Tower. This photograph illustrates the layout of the city, which was planned in the shape of a bird. At the center of the photograph is the National Congress Building, with it’s twin office towers and semi-sphere chambers for the Senate and the Chamber of Deputies. The Monumental Axis, the main street of Brasilia, runs in two parallel avenues through the center of the photograph. On each side are a series of identical structures designed to house the various ministries of the government. All these structures were designed by Oscar Niemeyer and the city layout was planned by Lucio Costa.