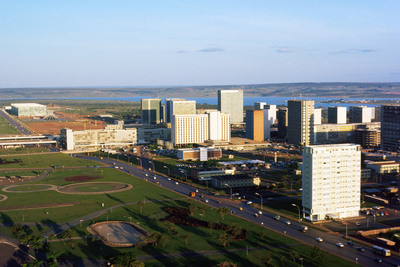 This photograph faces south east across Brasilia’s Monumental Access. The photograph was taken from the TV Tower. Prominent in the left middle ground is the Praça dos Aposentados, a housing complex for retired persons. Just behind that is the Cathedral of Brasilia, completed in 1970. The cathedral is made of a hyperboloid structure that is made from concrete columns, and designed by Oscar Niemeyer. Also designed by Niemeyer are the South Ministry Buildings, which houses Brazil’s government. The relatively low lying modern style building, just west of the Praça dos Aposentados, is the headquarters for Brazil’s national postal service, known as Correios.