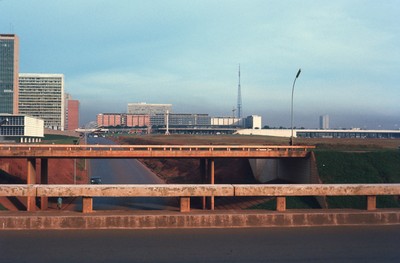 Looking west down Brasilia’s Monumental Axis Smolski capture’s an array of modernist architecture. Of note, to the left is Correios, the national headquarters for Brazil’s postal service. Prominent in the center right of the photograph is Brasilia’s TV Tower, completed in 1967. The structures that are shown in front of the tower seem to have been demolished sometime between the taking of this photograph (1974) and the present. Brasilia is a planned city, inaugurated in 1960, it is considered a masterpiece of modernist architecture. The city is built in the shape of a bird, or aircraft. The Monumental Axis, as seen in this photograph, is the fuselage, or body of the bird.