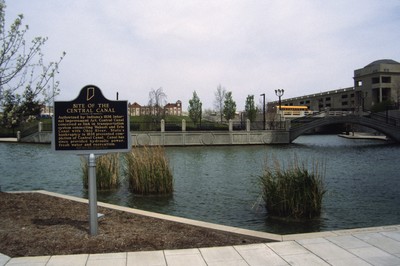 This photograph shows the site of the Central Canal, a proposed 296 mile canal that was to connect Peru to Evansville where it would then meet the Ohio River.The canal was aborted after the state fell into bankruptcy in 1939. This 1993 photograph shows a section of the unfinished canal in Indianapolis. This photo, taken in White River State Park, shows modern usage of the canal, mainly for recreation and city beautification.