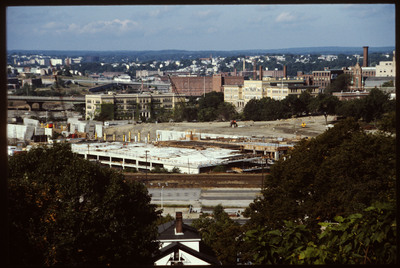 In 1986 Providence Station was completed. It replaced the 1898 Union Station as part of a redevelopment project to free up land from a mass of train tracks that had hemmed in downtown Providence. It is much smaller than its predecessor, reflecting the diminished role of railroad transit. In the background are a group of buildings since demolished. The URI College of Continuing Education buildings and The Merchants’ Cold Storage to make way for the Providence Place Mall in the 1990s.