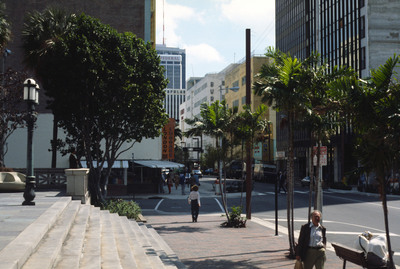 An east facing view down East Flagler St. in Downtown Miami. The street is named for nineteenth century railroad magnate Henry Flagler, and it runs west across town to the Florida Turnpike. This photograph show’s two buildings that have become symbols of Miami, the SunTrust International Center and One Biscayne Tower, both peaking over the center horizon line.