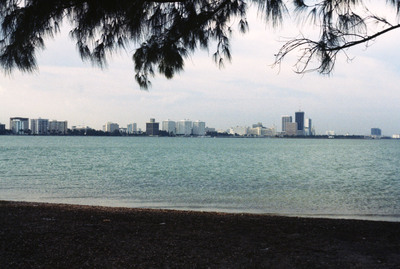 The Miami skyline as seen from Key Biscayne in 1978. At the right are some of Miami’s most famous skyscrappers, including th SunTrust International Center, completed in 1973, and One Biscayne Tower, a symbol of the city, completed in 1972. At the time One Biscayne Tower was the tallest building in the city, but it and the SunTrust International Center have since been obscured by modern high rises, including 50 Biscayne.