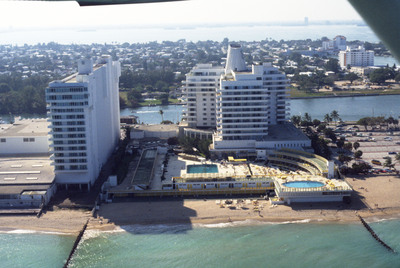 The Eden Roc Renaissance Miami Beach was completed in 1956. Designed by architect Morris Lapidus after completing the Fontainebleu, the Eden Roc’s neighbor. Lapidus used curvy and innovative designs that were widely criticized at the time they were being built. At the time it was built, the Eden Roc was considered a vision of the Italian Renaissance. Today the style he invented has been coined Miami Modernist Architecture (MiMo), although Lapidus himself would likely object to such classification. He was quoted as saying that his style was “simply an expression of my own ideas, not an expression of a particular school of architecture.”