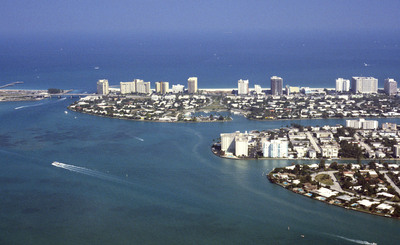 An east facing aerial photograph shows Miami Beach’s Oceanfront and Bal Harbor Islands in the late 1970’s. In the 1970’s Miami Beach’s tourism industry saw declines. Over the next decade, hundreds of Cuban refugee’s would move into the area which in effect pushed the retiree’s out of Miami Beach and led to an influx of a younger population.