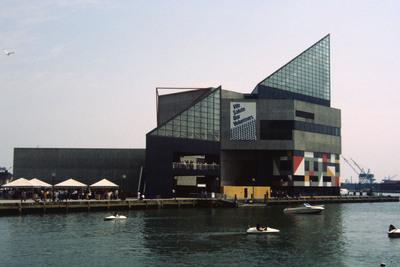 The National Aquarium in Baltimore photographed in 1985 shows it in it’s original form under the direction of Peter Chermayeff of the Cambridge Seven. Additions to the aquarium were made in 1990 and 2004. The National Aquarium is in Baltimore’s Inner Harbor and draws large numbers of tourists each year and provides a tremendous positive economic impact on the State of Maryland, generating $6.8 million in state and local taxes annually.